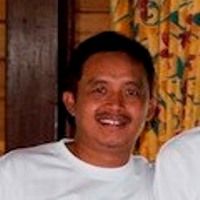 Gained his Master Degree on Rural Sociology  from Bogor Agricultural University in 2005.  He has been attending some trainings such as: Certification of Sustainable Forest Management (PHPL) from Indonesian Ecolabelling Institute (LEI) in 2008; Training PHPL Up-Grading in Forestry Training Center (Pusdiklat Kehutanan Bogor) in 2010; Training of technical assistance for rural farming communities organized by the Sajogyo Institute Bogor (science)  in 2005; Journalism training organized by Harian Rakyat Merdeka in Jakarta (2001) and Management Training of BMT (Baitul Mal Watamwil) held by ICMI (Association of Indonesian Muslim Intellectuals) in. Karanganyar, Central Java, 2005.

From 2005 – now, Doni works as a freelance in BAPPENAS, Ministry of Rural Development (KPDT) and the Ministry of Public Works Cipta Karya as the evaluation team and as a freelance consultant in some consultanting company in Bogor and Jakarta. In 2006-2007 he worked at JICA, UN-HABITAT and UNDP.